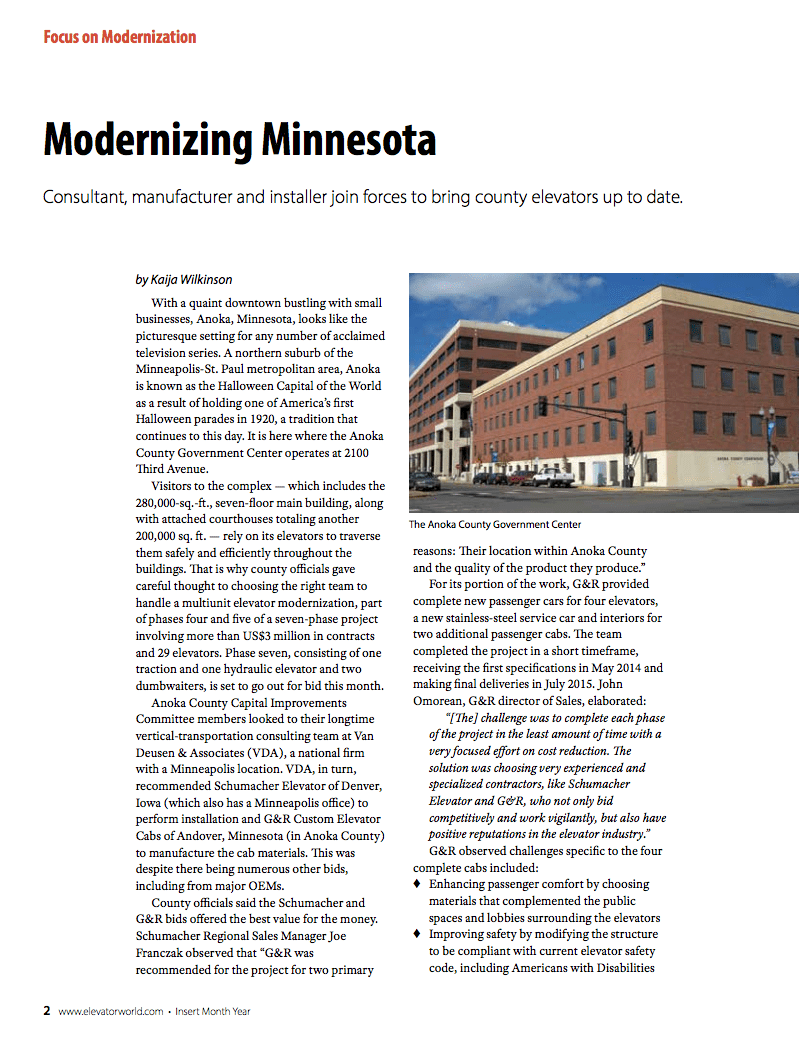 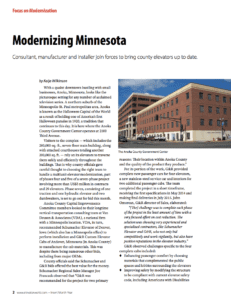 With a quaint downtown bustling with small businesses, Anoka, Minnesota, looks like the picturesque setting for any number of acclaimed television series. A northern suburb of the Minneapolis-St. Paul metropolitan area, Anoka is known as the Halloween Capital of the World as a result of holding one of America’s first Halloween parades in 1920, a tradition that continues to this day. It is here where the Anoka County Government Center operates at 2100 Third Avenue.

Visitors to the complex — which includes the 280,000-sq.-ft., seven-floor main building, along with attached courthouses totaling another 200,000 sq. ft. — rely on its elevators to traverse them safely and efficiently throughout the buildings. That is why county officials gave careful thought to choosing the right team to handle a multiunit elevator modernization, part of phases four and five of a seven-phase project involving more than US$3 million in contracts and 29 elevators. Phase seven, consisting of one traction and one hydraulic elevator and two dumbwaiters, is set to go out for bid this month.

Anoka County Capital Improvements Committee members looked to their longtime vertical-transportation consulting team at Van Deusen & Associates (VDA), a national firm with a Minneapolis location. VDA, in turn, recommended Schumacher Elevator of Denver, Iowa (which also has a Minneapolis office) to perform installation and G&R Custom Elevator Cabs of Andover, Minnesota (in Anoka County) to manufacture the cab materials. This was despite there being numerous other bids, including from major OEMs.

County officials said the Schumacher and G&R bids offered the best value for the money. Schumacher Regional Sales Manager Joe Franczak observed that “G&R was recommended for the project for two primary The Anoka County Government Center reasons: Their location within Anoka County and the quality of the product they produce.”

For its portion of the work, G&R provided complete new passenger cars for four elevators, a new stainless-steel service car and interiors for two additional passenger cabs. The team completed the project in a short timeframe, receiving the first specifications in May 2014 and making final deliveries in July 2015. John Omorean, G&R director of Sales, elaborated:

“[The] challenge was to complete each phase of the project in the least amount of time with a very focused effort on cost reduction. The solution was choosing very experienced and specialized contractors, like Schumacher Elevator and G&R, who not only bid competitively and work vigilantly, but also have positive reputations in the elevator industry.” G&R observed challenges specific to the four complete cabs included:

Founded in 1978 by a pair of elevator-industry veterans, G&R has since supplied highly specific products to budget-minded clients such as publicly funded entities. Working out of a 17,000-sq.-ft. space approximately 10 min. north of Minneapolis, G&R has done hotel, office and multifamily residential work for public and private clients throughout the U.S. and as far away as Abu Dhabi. Omorean states:

“G&R has a long history of providing precise engineering design and has the capability to produce a high-quality manufactured product, as well as committed customer support.”

Anoka County Project Manager Jerry Covel said communication with G&R was enhanced by the fact that county officials were able to see the finished work early. That, he said, reinforced the county’s confidence in G&R.

“G&R provided the cab interior components assembled as half-wall units as we requested, because it’s really hard to move a fully assembled cab wall through an elevator door because it’s too large and heavy. The finished cabs look really nice, and we installed them without any issues.”

This article was written by: Kaija Wilkinson, Elevator World, February 2016.

Visit our project gallery to see what the finished cabs look like.